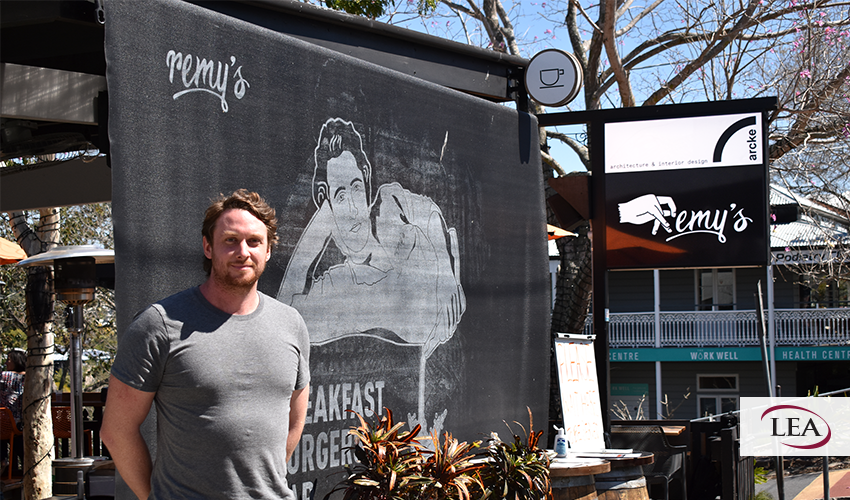 If you’re a Brisbane resident you’ve probably heard of them. Remy’s is an absolute must-try Café/ Burger and Booze stop in the heart of Paddington. They have made their mark over the years and have become a popular destination; it’s a lock-in for locals and it truly embodies the vibe of the area.

But the harsh reality for even the most popular food/ beverage dugouts is the impact of COVID-19. We pride ourselves on being an insurance brokerage that truly knows and provides for our clients, even outside of insurance when given the opportunity.

That’s why when LEA Account Manager Lyndel Juillerat heard of the opportunity to nominate an affected client for the $5000 Vero Business Recovery Grant she jumped at the chance to help out.

We spoke to Alex Triffett owner of Remy’s to find out more about himself and his business.

“Originally, I moved into the flat next door after having just come back from spending a year in Japan and was just looking for a job. I was working here as a breakfast chef for 2 years or more and just progressed from there. I remember when we first started and all we had was a sandwich press pumping out orders from a renovated hair salon.”

Remy’s has come a long way from what Alex described, but even for an established well-run restaurant like Remy’s, they couldn’t dodge the results the pandemic would have on their industry:

“We had to close completely for between 6-8 weeks and apart from Remy’s we have four other restaurants running. Over that period we had 50 plus staff, so we had a lot of people we couldn’t employ at the time.

We tried doing some takeaway trade but it wasn’t cutting it for us.

Running costs stay the same, but you’re just not making any money.

We couldn’t give anyone work, so we had literally been ground to a halt.”

Alex’s focus during this difficult time was more about holding together and supporting their close-knit group of staff members. He spoke compassionately about doing their best to try and keep on as many staff members as possible:

“It’s was really hard for a while, pretty much at the point of having no money in the bank, we didn’t know which way it was going to go. Our staff didn’t know what their future was going to hold and we were just trying to be able to support them because we wanted to keep them on until things got better. We got to the point where we were powerless to do anything about it.”

It was through Lyndel’s initiative that the opportunity arrived in Alex’s inbox.

“I didn’t even know about it, to be honest! And I wouldn’t have even applied if she hadn’t sent me an email saying – ‘We would really like to nominate you’. She’s worked with myself and Dane for a number of years now. – It seems small, but the gain and margins in this industry are small. For us, it’s a pretty significant amount and it will go towards making Remy’s better. When we do have money to reinvest back into the business we want to use that to improve it for the customers. So that money will go towards making it better for them.”

Keep an eye out for any new features/ renovations coming to Remy’s in the near future.

“We’re always coming up with cool new marketing ideas, the screen there is Matthew Mcconaughey lying down, looking a bit sleazy and pouring a beer over a burger.”

The joy in which Alex described the art piece, really encompasses the whole vibe of the place. Where else can you get the lot? – Specialty Coffee – Quick-Fix Brekkies – Sit Down Breakfast – Burgers – Booze – Live Jazz Fridays – DJs Sunday – AND!! 2-for-1 burgers deals!!

“It was because she reached out that we got it, so I’m really grateful to Lyndel for that.”